caution to warn or tell (someone) about a possible danger, problem, etc.
[+ obj] She cautioned me not to decide too quickly. = She cautioned
(me) that I shouldn't decide too quickly.
[non obj] - + against I would caution against getting involved with him.
----------------------------------------------------------------
NHK-BSで，『カルテット！人生のオペラハウス』を見てしまいました。
『コード・ブルー３』はよってスルーですわ。
TOEIC S&W対策
休みます。
ボキャビル
休みます。
NHKラジオ講座
Enjoy Simple English
My Hometown Osaka Part 2 Osaka - A Merchant City
Merchant Culture
In modern ages, Osaka was called Tenka no Daidokoro or the kitchen of the nation.
An active economic development nurtured a rational spirit among the people's minds.
The people became more interested in learning and thought.
Various educational facilities were set up and developed by their own efforts.
At first there was more emphasis on practical science for their own business,
but this soon led to further studies such as Confucian thought, philosophy,
religious studies, natural history and astronomy.
Acquisition of scientific knowledge accumulated in modern ages enabled them
to open the door to the next generation.
(from https://osaka-chushin.jp/en/routes/3690)
ボキャブライダー
manage to take care of and make decisions about (someone's time,
money, etc.) He manages his own finances.
You need to manage [=use] your time wisely.
waste to use (something valuable) in a way that is not necessary
or effective : to use more of (something) than is necessary
Don't waste water during the summer drought.
He always wasted his money on useless gadgets.
Turn off the lights so we don't waste electricity.
I think he's just wasting my time.
We can't afford to waste so much food.
motivate to give (someone) a reason for doing something
No one knows what motivated him to act in such a violent way.
The company has used a number of methods to motivate its
employee (to work harder).
- often used as (be) motivated
She said that she was motivated by a desire to help children.
prepare to make yourself ready for something that you will be
doing, something that you expect to happen, etc.
[no obj] They'll be arriving soon. We don't have much more time
to prepare.
- often + for We don't have much more time to prepare for their arrival.
He prepares for games by studying tapes of the opposing team.
At this time of year, most animals are preparing for winter.
[+ obj] We don't have much more time to prepare ourselves for their arrival.
She tried to prepare herself for bad news.
The sailors are preparing themselves for a long voyage.
定期購読
休みます。
Quotations
Classics - and in particular modern classics - and the books
one thinks one ought to read, thinks one has read.
[Alan Bennet, 1934-, Kafka's Dick, Introduction] 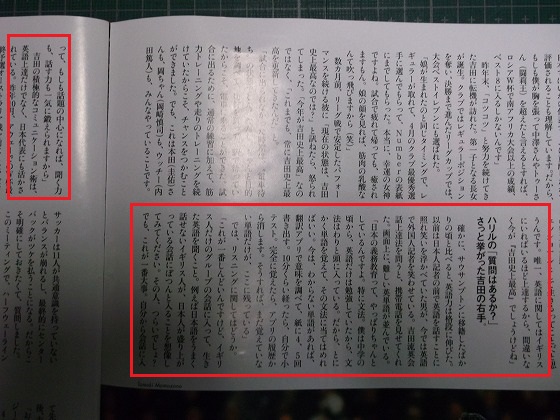